We are moving our forum in GitHub Discussions. For questions about Phalcon v3/v4 you can visit here and for Phalcon v5 here.

This is a demonstration of Phalcon's inconsistent Text and TextArea escaping

Here's what's displayed when I edit that post above. If an admin were to edit my post, they'd be executing my Javascript code too. 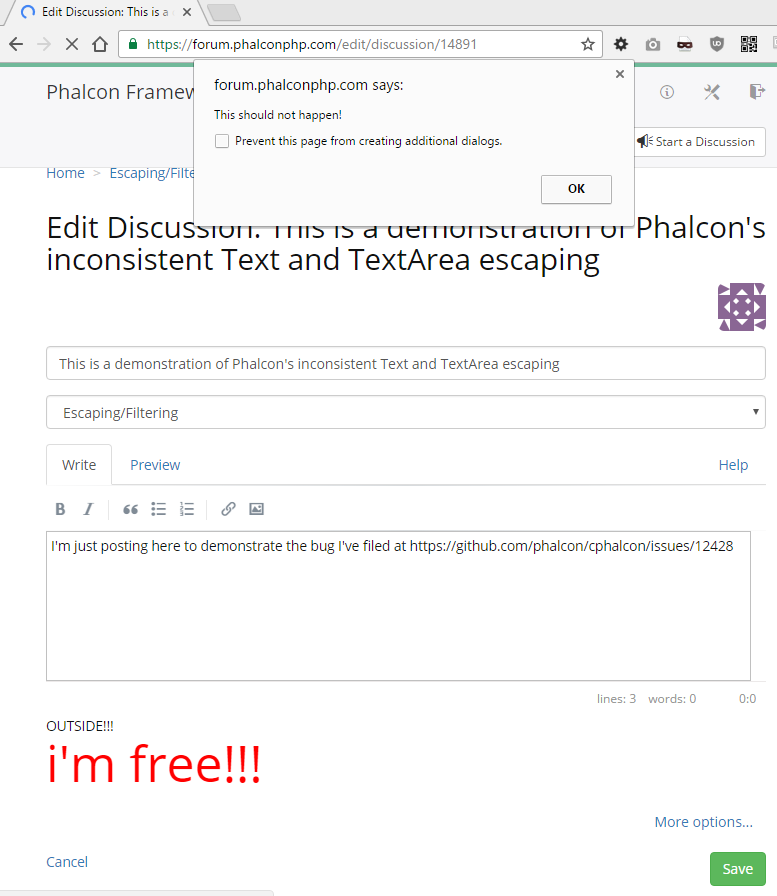 Security should come first with any framework, and there's a lot of room for improvement.

Thank you for pointing the problem in the forum source code.

As @niden has already explained to you in https://github.com/phalcon/cphalcon/issues/12428, we can't make the changes you are talking about, in the current branch Phalcon API, because it would break backward compatibility. Many projects escape output independently.

To do so, you don't need to release a new version of Phalcon or even worse, break working projects which already use escaping.

Fixed in the 3.0.x branch. I'll release a new minor Forum version as soon as possible. Thanks.

No worries. Thanks for your feedback. And I agree about the breaking changes thing, which is a great thing in Phalcon (they're very rare). I really apprciate all the great work you guys do.

I was just posting this here to demo/test the forum's implementation itself, not to nag about the cphalcon issue. :)

For anybody who is rendering their form elements from a lower level, i.e. from the Elements inside your $Form object (rather than re-creating them in your controller), you can use this extended TextAreaEscaped class instead of \Phalcon\Forms\Element\TextArea when defining your Form class...